Penny Langton, recently won the uTalk Challenge 2018, after taking on the challenge of learning 12 languages in 12 months last year.

The competition invites participants to learn around 300 words and phrases in a new language each month using its uTalk language learning app. Participants strive for full marks in 10 different units from subjects that range from Food and Drink to Disaster Relief.

Here she tells us why she did it and what she got from the experience. 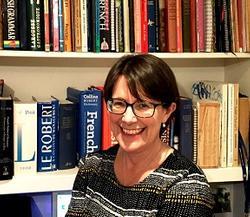 When my son Dan was at primary school, he enjoyed participating in the national Junior Language Challenge, and even reached the final on one occasion. I thought it was a great way of enthusing kids about language learning and, over 10 years later, was delighted to hear that uTalk was running an adult version.

The app uses images twinned with audio to teach and then test you on words and phrases. It proved to be a great way of learning and reinforcing vocabulary. While the app provides no information on grammar, I enjoyed using the phrases that I was learning to make assumptions about patterns in the language's basic structure, and then used other sources for clarification.

My learning strategy has always been very much read/write so I found an auditory method with a visual trigger challenging at first, but experienced a significant improvement in my memory as the year progressed.

Tackling the basics of a new language is always fascinating – like most linguists I take great pleasure in spotting shared roots and surmising word origins. Picking a new language each month - and which subjects units to study - was a real treat:

Two weeks late to the competition, I started with Catalan so I could get through the units quickly on the basis of my prior knowledge of Spanish.

Next I showed some solidarity with my son by studying Dutch which he is taking as a subsidiary language alongside Spanish and French at Manchester University.

In March I decided to start redressing my embarrassment as a French and Spanish translator that I barely know the rudiments of the European giant that is German.

I had learnt conversational Greek as an English teacher on the island of Evia 25 years previously, but while the grammar and alphabet remained in place, the vocabulary was in dire need of some restoration work.

Russian –surely my mastery of the Greek alphabet would be a short cut to learning Russian? Alas  no, but there is great satisfaction in now being able to decipher the Cyrillic alphabet (to date, on vodka bottles and Russian orchestral music…).

With family holidays on a sheep farm in Snowdonia at least once a year, Welsh was an obvious choice (this was the only language for which I chose the 'farming' unit). 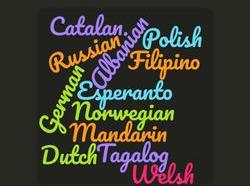 Esperanto was an eye opener, as I assumed it would be a combination of all the languages I already knew, but I found it much less intuitive than expected.

Filipino/Tagalog was slightly disappointing as the huge number of English 'loan words' made me feel like I was cheating.

Mandarin was by far the hardest, and yet potentially the most useful, as a 2-week trip to China was looming at the end of August. I ended up running for my train to the airport as I had spent so long trying to complete the tenth and final unit for submission before I left. My usual mnemonics were of no use as I found it impossibly difficult to equate what I was hearing to any languages I knew already. While in no way did this enable me to speak or read Chinese, I would like to think I occasionally caught a word or two in a restaurant situation!

Polish and Albanian were to my mind interesting bridging languages between others I had already done, and I finished with Norwegian as a suitably Christmassy choice for December.

It was a great opportunity to get a 'taster' of a wide range of languages. I wasn't looking to learn a new language per se, but rather to indulge an interest in comparing and contrasting European languages. I have always had a general interest in linguistics, but this has crystallised over the year of the uTalk challenge, and I am intending to apply next year for a Linguistics MA at UCL. However, the most notable and unexpected benefit of participating in the Challenge has been the marked improvement in my memory!

Penny Langton is a Spanish and French to English translator; she has been an MITI for over 20 years.

How CPD has changed my career

Do you have a CPD plan?

ITI's Christmas Hamper: The ins and outs of mentoring