ITI Awards recognise and celebrate a wide range of translation achievements, as illustrated by our winners in the translation assignment category over the last four years.

The Best Performance on an Assignment - Translation category has been at the heart of our awards programme since this was expanded in 2016. We are now inviting entries for the 2021 awards, which are open to both individual and team entries in this category.

In making decisions about our award winners, no particular type of assignment or sector work is valued above any other – it just depends on the achievements of the individual or team concerned in getting the job done to a high standard.

This is illustrated by our winners and the nature of their assignments over the last four years.

Agata was instructed as an expert under court order to provide translation of disclosure documents in legal proceedings. The disclosure consisted of several thousand emails and various documents, which Agata translated in batches. The assignment required excellent organisational and liaison skills and the ability to deal with a variety of challenges; for example, accurately translating often technical content from one of the defendants who was dyslexic.

Winning the award has raised my profile, both in the business and translation community. It has given me and my business the boost of confidence. I also learned from the experience and realised that in order to succeed you need a skillset that goes beyond being good at translation  - you need to be able to work with your clients by offering them solutions and alternatives, to show respect and understanding of your clients’ needs. Creativity, adaptability and consistency in your approach to translation are key. The assignment I was recognised for has required all those skills and since winning the award I have made sure I approach all my assignments in the same way. You win once and you will always be the winner.

Nathalie Clergues undertook the French transcreation of a radio advertising campaign. The text referenced nursery rhymes and board games – both bastions of childhood culture. Knowing the historical, musical and lyrical factors to be taken into account to achieve authentic and effective transcreation, and combining these with the needs of the client, were no mean feat.

I was absolutely delighted to win the award. Despite the admirable work professional bodies put into helping raise  awareness of translators’ work (and helping raise our own self-esteem in the process!), most translators and our work still go unnoticed. It’s also nice to see transcreation in the spotlight as a specialism, because it’s so seldom recognised. The award is a nice reminder that all the effort, dedication and chocolate mousse that I put into my work are not in vain!

The translation assignment was for a major international exhibition commemorating Martin Luther; it not only required intellectual and linguistic rigour and accuracy, but also logistical planning and deadline management of a high standard. The translations produced by a small international team contributed significantly to the accessibility of this important event for native and non-native English speakers.

What made you decide to enter for ITI Awards?

The translation assignment for which I submitted an entry was a very large project and, in many ways, quite career-defining. It was certainly the most intellectually and linguistically challenging project I’d been involved with during nearly 20 years as a translator. When the 2018 awards were announced, I didn’t immediately think of entering, but the idea grew on me. As a freelance translator, I receive very little feedback about my work, unlike friends who work in conventional jobs, with managerial hierarchies. In fact, my clients are often simply not in a position to judge whether or not I have produced a good translation, otherwise they wouldn’t have needed my services in the first place! The only real feedback I get is being paid and being asked to work for the same client again. However, in the case of clients who only speak one of the languages I’m translating between, being paid and receiving repeat work probably says as much about my communication and time management skills as it does about my abilities as a translator.

On the Luther project (the assignment for which I won the award) I worked with an excellent editor who was also a translator and I really valued her feedback on my work. The more I thought about the ITI Awards the more I realised this could be an opportunity to test my work and see how it would be judged by my peers, other translators who would really understand whether or not I was producing work of a high standard.

When I submitted my entry for the award, it really wasn’t with any expectation of winning! It was very exciting to discover that I had won the Best Performance on an Assignment - Translation Award and I enjoyed going to London to collect it. However, I perhaps couldn’t have anticipated that the experience would have such a profound effect on me. I think translators are so often virtually invisible and it is rare to receive this kind of recognition. I felt it immediately gave me a new confidence and authority in my work. I shared the news of my award with all my clients who responded with very kind comments, as did many colleagues. I have also highlighted it to new clients and in competitive tendering processes. I think it has probably already led to me winning at least two new clients – an additional bonus!

But beyond this, and very interestingly, I think, the experience has been rather liberating, in that I feel it has given me greater confidence to question my work and lay it open to scrutiny. In my early years as a translator, initially working mainly for agencies, I felt I was always having to justify myself – both for the word and style choices I made and for the rates I wanted to charge. This perhaps had the tendency to make me a bit defensive and reluctant to concede too much. In addition, I was in any case often in the position of being the only person able to judge the quality of my translation, but that judgement could, of course, only ever be quite subjective.

Since winning the award I feel I communicate with existing and potential clients with a greater sense of authority. It feels as though the recognition conferred by the award has given me a firmer base to work from. Recently, I have also taken up the invitation from two colleagues to be part of a ‘Revision Club’, involving weekly peer review and criticism of each other’s translations (inspired by a workshop given to the ITI Scottish Network by Tim Gutteridge and Simon Berrill). This, coupled with the award, has contributed to my daily translation practice becoming more reflective.

In summary, I think the award has been an important part of the process of maturing as a translator and recognising that, even after 20 years as a translator, my work continues to evolve. I feel very grateful to ITI for giving me this opportunity to grow and develop further. 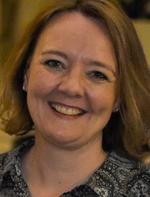 Karen was the first-ever winner in this category. The project involved translating approximately 24,000 words of French into UK English in the space of a week – highly technical content in the field of chemicals. Due to the timescale and size of the project, Karen decided to subcontract part of the project, working with an editor to optimise the quality of the finished publication. The client said: "Not only did she manage to do the required job in a very short time, she also allowed us to enrich the original and translated version by providing us expert comments on the content."

What made you decide to enter the ITI Awards?

In late 2016 I completed a translation project that made me think to myself, ‘Wow, I deserve an award for that!’ Most jobs are run of the mill – this one was different. I wanted to write down its story and not forget the intensity and resulting satisfaction. Only a week or two later the ITI Awards were announced, so I did just that!

It was a joy. I was proud of the achievement. I’m not sure I hit the sweet spot in terms of promoting it at the time, but I shared on social media and used the photos taken to promote my work. To this day, it makes a nice feature for my website. The reminders lasted for months: the press release and photo that ITI sent to my university alumni association were included in the next alumni magazine and a university friend posted about it on Facebook. So it definitely brought me some ‘glory’, so to speak.

Find out more about entering for the translation assignment award here.

How AFT propelled my career forward