United for a better future

How moving into translation in the field of International Development unites one translator’s work with her desire for a better future for all.

In this article, Françoise Vignon FITI explains how, over a number of years, she began specialising in the area of international development and by doing so she is united in a common cause with those working directly in this field.

Translation is a second career which I took up when I left my job as an MFL teacher in a large comprehensive school. My university degree was in “langues étrangères appliquées”, which combines the study of two languages mainly for use in the business world, together with some basics in economics and law, so I felt most comfortable translating general and corporate texts.

After a few years, I decided to try myself at interpreting and prepared the DPSI exam by following Kirstin Heimerl-Moggan’s course. I chose law as a specialism since I had already some basic knowledge. That was the first time I had put some thought into specialising in any field. I then worked for a few years combining both skills, interpreting and translation, but ultimately I felt more comfortable with the latter.

Every time I attended the ITI conference or went on various courses, I kept hearing that to progress in my career, I needed to clearly indicate some areas of specialism. Over the years, agencies had been offering me small jobs relating to international development and I had felt quite at ease with this type of work. I also liked the idea that what I produced would help a good cause.

I started reading reports and brochures online and on paper which various NGOs were producing, both in French and English to study the specific terminology and build up a glossary. I was not quite ready yet, but wanted to try my hand, so for a while, I offered my services via Translators without Borders. It gave me the opportunity to practise my skills and come across a large variety of topics within the main international development theme.

This experience allowed me to confirm my intention. I started sending my details to various NGOs. I also attended the BOND conference on the recommendation of a colleague. I did hope that I would make contact with some future clients, but that was not my priority. I did not gain any work from this conference, but nonetheless I found it invaluable as a training exercise: I extended my knowledge of the topical issues and got a useful insight in the areas which were to become a major focus in future.

I added “International development” as a specialist field to my profile and Agencies and NGOs started to contact me. Gradually, I found myself doing more and more in this field and my legal basics came in handy more than once. I find myself prioritising more and more the NGOs whose work is aimed at causes that are dear to me: human rights in general, but more specifically, children’s, girls and women’s rights, but also sport & sport spectating for handicapped people. 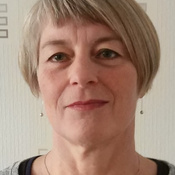 Françoise Vignon is a qualified English>French translator since 2002. She trades as Into French and is a member of ITI and CIOL with Chartered Linguist status. She specialises in legal, humanities and social science translations. She is joint-coordinator of the ITI Media, Arts and Tourism Network.

In her free time, Françoise enjoys seeing friends and family, visiting places when hiking, motorcycling or travelling abroad, and she likes to keep fit and to practise yoga.