Like many translators Alicja Tokarska wanted to use her skills to help people in Ukraine and in her home country of Poland. She found an unexpected fundraising initiative

In times of crisis, taking action is the most useful thing to do. After days of doomscrolling my newsfeed and reading about the situation in Ukraine and the number of refugees that neighbouring Poland, my home country, was receiving, I felt exhausted and hopeless. I registered at Translators without Borders and Poland’s Translators for Ukraine (both organisations can be found on the ITI website), but so far I haven’t been given any projects. Little did I know that my musician partner’s charity undertaking would lead me to take on a project manager role…

Angus and I may share an office, but our jobs couldn’t be more different: when I agonise over ways to condense my subtitles, I often get annoyed by repetitive beeps coming from his end of the room. He’s a guitar pedal builder; and he turned his practical skills to a fundraising project.

He produced a set of guitar pedals featuring the Ukrainian flag colours and with the pedal control names (‘volume’, ‘sustain’ and ‘tone’) translated into Ukrainian. However, as neither of us speaks the language, he’d taken the translation from Google Translate…and we all know how this could end. I thought I could help by finding someone to translate or revise the machine translation (MT) output.

I told Angus that I would contribute by covering the cost of hiring a professional – a small cost in comparison to the time it would take him to build 10 pedals. That’s how I met Svitlana Genina.

‘No fee needed: it’s for Ukraine’

Svitlana has spent the last 20 years working at the International Association of Polish Businesses in Ukraine. In 2004 she also established a translation agency in Kyiv. Alongside three other linguists, she offered translation services between Polish and Ukrainian. All four are now in Poland (she is in Warsaw), trying to make sense of the new reality and hoping to be able to do something for their country.

I saw Svitlana’s post in the Translators for Ukraine Facebook group. She said she was looking for any kind of work for her and her colleagues, including translation work. I thought this was a perfect opportunity for me to reach out. We agreed Svitlana would charge me for one page of work, but when upon delivery I asked for the invoice, she replied: ‘No fee needed. It’s for Ukraine’s future.’ I asked her if there was any charity I could support in lieu of her fee, so I’m currently in the process of buying 10 tickets to Mykolaiv Zoo – though it seems that many people are also trying to help the keepers with the food bill for the animals, as the payment page keeps crashing. I’m just hoping that my payment gets through soon so that I can keep my promise to Svitlana.

At time of writing, the pre-orders for the pedal are yet to be put online on ABL Pedals’ website, but Angus and I are both sure the product will sell out in a matter of days. This means that DEC’s Ukraine Humanitarian Appeal, my partner’s charity of choice, will shortly receive around £600, which for a one-person business that’s only been trading since October 2021 is a pretty decent sum.

Using our skills in many ways

So far, I’ve not translated anything to do with the war in Ukraine but by supporting this project I have been doing something that I feel has made a difference. I also suggested that Angus replace one pedal name completely (the Big Muff, which is frankly rather suggestive in potential translation) with ‘Glory to Ukraine’, a slogan that Ukraine’s President Volodymyr Zelenskyy often uses in his video addresses. The words Слава Україні have grown in popularity and are a perfect message to include on a product raising funds for Ukraine and its people.

This experience has shown me that during a crisis translators can use their skills in many ways: from helping find professionals with the required language pairs, to signing up to volunteer organisations or simply sharing their details on our social media. Even if we don’t speak that language itself, we have the connections and expertise to offer our own contributions. 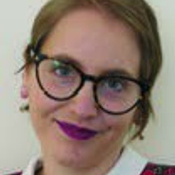 Alicja Tokarska is a freelance translator based in Glasgow. She translates from English, Spanish and French into Polish, and from Polish into English. She’s passionate about inclusive communication and works mainly in the areas of the environment, fashion and textiles, culture, and technology. You can get in touch with her by email.