Following a change in career in later life, Sue Mason has just been to her first ITI conference. Here, she reflects on what it was like for someone new to the profession.

I have just attended my first ITI conference and it was a corker! As a new entrant to the profession and having never attended an ITI conference in-person before I was lucky enough to be invited to apply for a bursary from ITI to help with the cost. Imagine my delight when I heard that I had been successful, making it possible for me to attend, and I am so glad I did.

I have been to many professional conferences in my former career as an NHS project manager and third sector employee, but this was the first time I had been to one where most attendees had paid the cost themselves. I don’t know if this was why it was such a different and positive conference, or if it is just that translators and interpreters are all really nice people, but it was definitely the best conference I have ever been to. 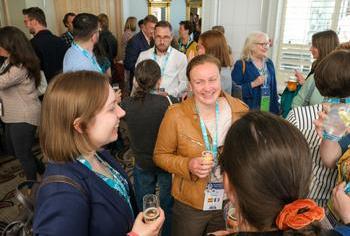 The first thing that hit me on Monday night, when I nervously entered the welcome drinks reception in the, aptly named, Grand Hotel in Brighton, was the noise. It wasn’t a buzz, it was much louder than that and something I had not heard for a long time - the joyous sound of hundreds of people talking animatedly together. For about twenty seconds, I felt intimidated and considered walking straight out again, but then a delegate turned to talk to me and I was off! This set the tone for the whole two days. No-one was alone unless they wanted to be, and there was the same exuberant hubbub during every break.

I made many new connections and also met some translators in person, whom I had only met on Zoom meetings before. For example, my ITI Medical Network mentor, Francesca Matteoda, who taught me so much when I was her mentee in 2019, and Rachael, one of my fellow Spanish Revision Club members, who I have been practising medical and literary translation with over the past six months.

Of course, it wasn’t all chat and great food! I also attended some excellent talks, which I will be able to put to good use in my first year as a translator, and beyond.

Since I am just starting my freelance translation business, I wanted to find out some tricks of the trade to help me on my way. Dot Roberts and Kelsey Frick’s wonderful talk about “disrupting” LinkedIn was very useful. The key message I took from it was to show my authentic self, and to not be afraid to have some fun. Dot and Kelsey showed that it is possible to be professional and enjoy yourself at the same time. In fact, your business is likely to thrive if you get this approach right!

Fiona Gray’s talk about balancing a mixed workstream of direct clients and translation agency work was extremely useful, and eminently transferrable to my current situation, where I am working both as a translator and as a navigator for autistic adults. Both Fiona and Bex Elder, in her talk on productivity, passed on loads of tips on how to be more organised and productive. I will definitely be investigating some of the software and ideas they suggested.

I also enjoyed Daniel Hahn and Mary Hockaday’s keynote speeches. Daniel Hahn is a bit of a hero of mine. I find his skills as a literary translator mind-blowing, but in his talk in Brighton, he showed us that the finished product is usually preceded by a very rocky path. He shared some pages from one of his “shockingly bad” first drafts. My MA dissertation was in the form of a literary translation with commentary, and it was so reassuring that my semi-chaotic approach to translation of my first draft, was not dissimilar to the scattergun hybrid of stilted, English prose, yet to be translated Spanish terms and questions which made up Daniel’s first drafts.

Mary Hockaday was, until recently, Controller of the World Service, and before that, she was a war correspondent and head of the BBC newsroom. She provided a fascinating insight into the importance of language in the BBC and how subtle changes to wording can subvert or change the message. Cate Avery also addressed the use of language in her talk about the way language changes over time, and how translators can handle differences of opinion with clients about how words are spelt, and which words are acceptable to use. A subtle and courteous approach is definitely the best policy here, according to Cate and the lively hybrid audience.

I missed the last couple of sessions due to being late back from a very sociable Spanish network lunch in a tapas restaurant, and then having to get a train back up to Cumbria. However, the blended nature of the conference, means that I am able to catch up online with the talks I have missed. I have ear-marked ten presentations to watch, including Catherine Fuller’s session about Literary translation; Michael Robson’s talk about whether honesty is always the best policy, and fellow Cumbrian, Hayley Wood’s discussion about the challenges of parenting and freelance translation.

I am very grateful to ITI for awarding me a bursary to attend my first ITI conference. It has confirmed to me that I have chosen the right path finally, at the age of 54, and I know that I will have ongoing support from the wonderful translator community as I develop my business over the next few years. 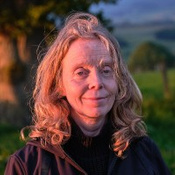 Sue completed her MA in Translation at the University of Portsmouth in October 2021 and started working as a translator from Spanish and German into English, in March 2022, alongside her role as a navigator (a sort of mentor) for autistic adults. Before that, she worked for over 25 years in the NHS and the community and voluntary sector, as a researcher, project manager and advocate, supporting vulnerable adults and young people to have a voice, and to improve services.

Sue is currently specialising in medical and healthcare translation, but is keen to expand her experience. She is particularly interested in social policy, politics, international development, food, and outdoor activity/sport translation.

Sue lives in rural north Cumbria with her partner, two daughters and Mabel, the cat. When not ferrying her girls all over the place, she enjoys open water swimming, cycling, fell-running, growing vegetables and cooking fancy(-ish) food!