Discover how a team of three interpreters served to unite the Welsh Government and a delegation from Brittany as they sought to strengthen trade and cultural partnerships ahead of Brexit. 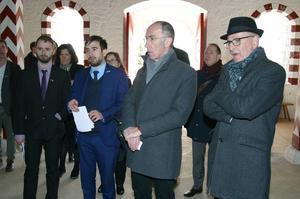 The 19 men and women who met in Cardiff in March 2020 may not have shared a common language but the ability of the interpreting team to navigate both language and culture, specifically through the transfer of ideas between parties, is testament to the fact that both people and cultures can be united once the barrier of language has been removed.

The interpreters – Mike Downey, Salima Garti and Sean Davidson – were commissioned by ITI Corporate member Language Company Group to provide interpreting services to the delegation. They were selected based on their academic qualifications and professional experience. It was particularly important for the client that the interpreters selected had proven experience working in both consecutive and chuchotage modes of interpreting.

The main objective of the assignment was to facilitate communication between the Regional Council of Brittany's delegation, the First Minister of Wales, and the Minister for International Relations and Welsh Language for the duration of their visit.

The two-day programme included a series of lunches, dinners, speeches, and a concert. By ensuring seamless communication throughout the interpreters were able to facilitate trade talks, as well as assuring that the delegation enjoyed the itinerary and so formed a positive impression of Wales ahead of a new chapter in the relationship between the two regions. 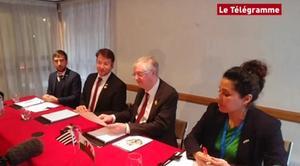 The work mostly consisted of whispered interpreting at cultural events and tours, consecutive interpreting during official dinner speeches, as well as press conferences for Breton media involving President of the Regional Council of Brittany, Loïg Chesnais-Girard and First Minister of Wales, Mark Drakeford.

Originally there were to have been four interpreters in attendance, but one of the team had to pull out at the last minute due to ill heath, posing an additional series of challenges. Undeterred, Mike, Salima and Sean, showed a united front and soon rearranged their approach, balancing the workload as evenly as possible while playing to each individual’s strengths.

It was a demanding schedule and depending on the situation, the team needed to adapt their approach. They were required to work more discreetly when providing whispered interpreting during cultural visits. In contrast, when delivering consecutive interpreting at the press conference and official dinners they had to match the output of the officials speaking, in order to relay their communication beyond word-level meaning.

The assignment earned the team the ITI Award 2021 – Interpreting Assignment, recognising their agile approach as they dealt with changing circumstances both before and throughout the two day visit.

Starting Work as a Translator or Interpreter (SWATI) Session 1

RSI: Bridging the gap between suppliers and clients

Ethical and technical dilemmas in RSI

KUDO’s insight on how the pandemic changed interpreting