For ITI members there's a lot more to continuing professional development than simply attending a translation workshop or reading a specialist magazine. Here we explore some of the more unusual CPD experiences our members have got involved in.

What springs to mind when you first hear the term 'CPD'? On the spot I bet most of us would go for translation workshops, reading books and watching TV in our source languages, maybe business skills courses. But earlier this year we asked you to tell us about any CPD you’d done that was a bit more ‘out there’, and you did not disappoint! Here’s what a few of our fellow members have been up to.

First up, Alessandra Battaglia AITI. An Italian translator and interpreter working from English, French and Spanish in the marketing, fashion, tourism and legal fields, Alessandra usually focuses her CPD on honing her specialisms and marketing her business. But one rather different event back in 2016 really stood out, she explains. ‘I play the piano and the violin, so music is number one in my personal life. When I saw an event called “Music and translation in opera, music theatre and popular music”, I had to go!’

Run jointly by ITI’s West Midlands Group (WMG) and the Media, Arts and Tourism (MAT) Network, the full-day event was held at the Birmingham Conservatoire with speakers from the Royal Opera House and the University of Vienna.

We even went into the engine room of Tower Bridge to see the hydraulic rams that raise and lower the bridge.

‘In the first half, we learned about translating music while sticking to the rhythm. There was a lecture part followed by workshops in language groups, in which we were given sheet music and lyrics to translate, and access to a grand piano to test out our attempts. There was even a choir there to sing our translations! In the afternoon we looked at translating popular music, or “the underdog of translation”, as the speaker called it.’

What did Alessandra take away from the event? ‘More in-depth knowledge of music translation - an area I dream of working in one day.’ She even found a way to turn her CPD into training for others: ‘At the time I was working in-house and we all had to give presentations to our colleagues. I chose to talk about translating music, and my colleagues and I actually started translating songs for fun! We translated songs from La La Land and, of course, Disney cartoons. It’s so good to have friends I can share this interest with.’

Getting down to the coalface

When it comes to CPD, Jo Waller FITI (a French, Italian and Spanish to English translator) covers all bases, from webinars and her contributions to the Setting Up as a Freelance Translator (SUFT) and Starting Work as a Translator or Interpreter (SWATI) courses to language top-up courses and everything in between.

Jo is a specialist in engineering of all kinds, and earlier in her career she and her family would regularly go on educational visits to power stations. ‘In the 1980s and 1990s, power stations used to run open days and guided tours. We visited coal-fired power stations, such as Kingsnorth on the Thames estuary and Richborough in Kent, and the nuclear plant at Dungeness Bay. We even went into the engine room of Tower Bridge to see the huge hydraulic rams they use to raise and lower the bridge.’

Did this help with her translation work? ‘Absolutely! There would often be Q&A sessions with engineers, which helped me acquire new terminology. There were displays, posters and models everywhere, and I could take leaflets home for reference. I’ve also attended open days run by Vattenfall, a Scandinavian energy company with offshore wind farms in the Thames estuary, where I made some valuable contacts and got some interesting materials. I use all of it directly in my work.’

Another member whose CPD perfectly combines her interests and her work is Jacinta Kal MITI, an English to Dutch translator focusing on medicinal cannabis, ancient history, classics and - most importantly for our story - railways.

‘I grew up in the Netherlands,’ she explains. ‘In the 1980s my parents became members of a Welsh railway they liked the look of, and every couple of months we would receive the railway’s magazine, which I loved reading. In 2009 I decided it was finally time to visit, and I ended up joining as a volunteer. It was great fun, and I came back again and again.’

The organisers brought out a selection of organs, and it was my job to cut open the larynx.

When Jacinta began studying for her MA at Swansea in 2011, she took the opportunity to spend a few weeks volunteering and has since become a qualified guard and fireman on the Talyllyn railway. ‘I even met my partner while I was volunteering, and he’s now a trainee driver on the larger Ffestiniog railway.’

And how has tending the fire on the Talyllyn steam engines benefited her translation work? Rather well, it appears. 'The railway translations I tend to work on are operations-based or press releases, and volunteering has given me great background knowledge. It’s excellent for terminology because many of the processes and safety measures are the same. And sometimes I recognise things I’ve come across before, like signalling, regulations and safety.’

Jacinta’s work on the railways is a great example of hands-on CPD for translators and interpreters, and practical training is exactly what Kirsty Heimerl-Moggan FITI was looking for, too.

At the start of her career, Kirsty, an English to German conference interpreter and interpreting trainer, could not find any CPD for interpreting in a mental health setting. ‘Back then I was signed up with the town hall translation service and was sent out on assignments without any onboarding or training apart from being told how to file an invoice, so I had to find my own CPD,’ she explains.

Through a friend who was a mental health nurse, Kirsty heard about an in-house training course run by the Manchester Mental Health Service for their nurses. ‘I was the only interpreter on the course. It was held at the hospital, so I actually came into contact with patients, and it really helped me get over the fear of not knowing exactly what would happen when interpreting in such a setting.’

Thanks to a particular phobia, however, Kirsty inadvertently became part of the training herself.‘The course showed me the kinds of scenarios I’d need to get used to if I wanted to work as a mental health interpreter. But I have a real fear of razor blades, so when the trainers played a video on self-harm I fainted and hit the deck. Looking back I’m so glad my “fainting episode” happened surrounded by lots of lovely, caring nurses and not on an actual job.’

The prize for the most literally hands-on CPD, however, has to go to English to German medical translator Ulrike Nichols MITI. While a workshop called ‘Dinner and Dissection’ would probably not be everyone’s cup of tea, for Ulrike and fellow medical translator Bärbel Herrmannspahn  MITI it was just what the doctor ordered. 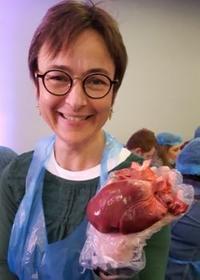 ‘The Anatomy Lab Live event was open to anyone interested in the human body. I saw it advertised in the ITI German Network’s newsletter and thought it sounded great, so Bärbel and I signed up.’ Ulrike, Bärbel and around 250 other dinner guests were served a three- course meal on tables covered in cling film, and once the plates had been cleared the room suddenly fell dark. ‘Boom! Bang! Flash! The organisers had simulated a car crash, and we saw silhouettes “treating” the patient behind a curtain. We heard them pronounce the patient dead, and then the lights came back on. They told us we now had to work backwards and piece together what had happened to the body from the moment of the accident until death.’

Each attendee (these included medical students, nurses, team- building groups and fitness instructors) was given a role. ‘There was a doctor, a surgeon, a lung specialist, specialty nurses... After explaining the “rules of the game”, the organisers brought out a selection of pig organs, and it was my job to cut open the larynx.’

In Ulrike’s group they focused on the cardiovascular system. ‘I do lots of cardiology-related work, so it was fascinating to have such a hands-on experience. This practical element also helped break the ice, and we started talking to the other people on our table. They worked in the medical field, so they really knew what they were talking about.’

How has this unique dinner helped Ulrike with her work? ‘Overall it has helped me visualise the body structures more effectively. It also gave me invaluable insight into which instruments are used – for instance, the larynx is cartilage so you use scissors rather than a scalpel. I thought I’d be completely grossed out, but surprisingly I wasn’t!’

If you have any weird and wonderful CPD of your own to feature in a future article, please email Kari Koonin at [email protected]. I’m off to think about how bland my CPD log is!

This article first appeared in the September-October 2020 edition of the ITI Bulletin. 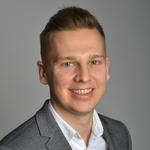 Dean Evans (MITI) is an English translator and editor based in Tunbridge Wells. Working from German, Spanish and French, he specialises in patents, with a particular focus on patent litigation and mechanical and electrical engineering. He is the new Coordinator of the ITI French Network and has been a member of the Professional Development Committee since July 2019.

If you have undertaken some 'Weird and wonderful' CPD recently and would like to write a short piece (approx 200 words) for the ITI Bulletin, please contact Kari Koonin, chair of the Professional Development Committee, at: [email protected] for more information.