We talk to Andrew Godfrey, Coordinator of the ITI German Network, in the latest of our ITI Profile series. 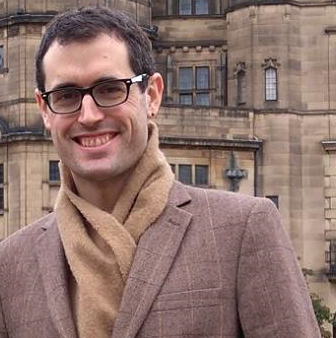 Did you always want to work in languages?

I never had a very clear sense of what I wanted to do career-wise, though I was keen to use my German in some capacity if possible. So I’m really glad things worked out so that I get to read and speak German every day in my work.

You studied for a PhD in philosophy at Birkbeck, University of London. What was your research subject?

My thesis was on parallels between the philosophical ideas of Friedrich Nietzsche and Ludwig Wittgenstein, particularly the concept of ‘aspect-blindness’.

How has your experience as a researcher influenced your work as a translator?

It has affected the sort of work I receive. Although I left academic research nearly ten years ago, a large part of my translation and proofreading work is on academic topics. Sometimes, my philosophy subject knowledge helps out with translation; at others, it makes me question mistakes or bad arguments in the source text!

You have been working as a translator and a proofreader since 2008. What made you decide to do both types of work?

The decision was made for me originally: I worked in-house at an agency where I was trained to do both sorts of work. I planned to drop proofreading when I went freelance, but gradually realised that it was helpful to offer it alongside translation since many clients require both services (often in one and the same text). I’ve also found that the line between the two often blurs: translating often requires you to ‘edit’ the source text into something more workable in English, while proof-editing texts by non-native authors often feels like you’re ‘translating’ a text that’s only English on the surface.

What do you enjoy most about being a translator?

I find the work in and of itself very stimulating and varied. You learn a lot about lots of different topics. I also enjoyed the freedom of working from home even in pre-Covid times!

Give us an example of a translation you have done recently that you found particularly interesting.

I have done some translations on German economic history, topics like the cotton industry and coins/currencies, that sound very dry on the surface but are actually fascinating once you realise all the politics, intrigue and conflict underlying these seemingly very mundane things.

You are the Coordinator of the ITI German Network. What sort of things have you been working on for the Network recently?

We’ve been organising a series of virtual workshops. One on patent translation, another on the translation challenges of Covid-19. Plus our very first online Christmas party, which was good fun – especially once we discovered you could play festive music in the background. At the moment, we’re planning some more workshops and socials. Some members are also launching a book club, which I’m very excited about.

The Network launched its bursary scheme a couple of years ago, each year awarding a bursary to a translator or an interpreter at an early stage in their career. How has this been going?

We’ve awarded the bursary to two very worthy winners so far. It covers the cost of ITI and GerNet membership, plus mentoring with an experienced translator. I wanted to introduce the scheme so that the people who stand to benefit most from membership of a professional association could do so without the financial barrier, and we’ve been very happy with how it’s going so far.

What sort of CPD are you focusing on for yourself in 2021?

I’m hoping to complete some more of the excellent CIEP editing training. And, of course, I’ll be availing myself of the GerNet translation workshops that I’m organising too!

Who is your favourite German-language author?

Franz Kafka. I’ve loved his short stories ever since I was a teenager, and I find something new each time I go back to them. My favourite recent rediscovery was The Burrow (Der Bau), which has added resonance in the strange, anxious times we’re living in.