Interpreters don’t have to work  on the front line or in a danger zone to find their mental health is affected by their work, says Kavita  Parmar.

Unterpreters work in many different scarios - some of which are very sensitave and emotionally demanding. And some of those demanding situations can be surprisingly close to home. In my agency, which specialises in delivering interpreting services to the health and social care sector in the West Midlands, we have a network of interpreters who go out every day into the local community supporting black and minority ethnic (BME) patients and service users for whom English is not their first language.

Our aim is, of course, that everyone communicates effectively, the organisation fulfils its role in delivering equitable access to health and social care for its patients, and the patient goes away in a better state of health than they arrived.

But what about the types of conversation that these interpreters have to interpret? In this arena, conversations can be hard-hitting, emotional and outcome-driven. Interpreters need to stay detached in order to do their job. But at the same time they are not computers – they have emotions and feelings – and their work can have an impact.

On 17 June 2016, the West Midlands Combined Authority was founded, with directives including creating a mental health commission to review the current framework across the country and create a reformed mental health structure based on this. I was invited to the steering committee to discuss how the commission could change the current state of affairs and whether a framework could also be put in place to support the community.

I had two questions. First, what was the uptake of mental health support in minority communities considering the potential cultural barriers? And second, how did interpreters support themselves and their own mental wellbeing, given the kind of situations they may face on a daily basis?

To find answers to the first question, I set about doing my own research. How ready were people from the BME community to seek support for issues relating to mental health, and did cultural opinion and stigma affect people’s decisions and feelings about this?

The prevalence of reported and/or treated common mental disorders varies markedly in different communities. For example, there is a relatively higher prevalence of anxiety and depression in South Asian women (63.5 per cent compared with 28.5 per cent of White women) and psychotic disorders in Afro-Caribbean men (3.1 per cent compared with 0.2 per cent of White men). There is also wide variation in the pathways and pattern of use of mental health services. In general, people from ethnic minorities are less likely than their White British counterparts to contact their GP about mental health issues, to be prescribed antidepressants or to be referred to specialist mental health services.

Certainly, looking at the data from our own data sets over the past year, we found that there are marked differences in language requests in mental health settings compared to the rest of the NHS. Noticeably, Romanian interpreting was not often requested across the four mental health trusts in our study.

In comparison, there was a larger demand from South Asian communities within the West Midlands region for interpreters from Urdu, Punjabi and Bengali. This is particularly interesting in the light of a report from the British Asian Trust which found that only 5 per cent of people in Pakistan had a knowledge and understanding of mental health issues, resulting in high levels of stigma, which was preventing people from seeking help. If this is the case, then the UK is already leading other countries in changing the mindsets of BME communities on the topic of mental health; and interpreters are of course playing a huge part in this.

We aim to repeat the study across regions over the next year to identify whether regional variances account for differences in the uptake of mental health services and/or whether there is a cultural factor.

I have also been looking inward to my interpreter network. The importance of using interpreters in a mental health setting has been well documented; but how are interpreters protecting themselves in terms of their own wellbeing, when they are privy to information and situations that may affect their state of mind?

Take Anna, for example. She has been an interpreter for over 20 years. For the last two years she has been a regular interpreter for a patient receiving treatment for Hodgkin’s lymphoma. This form of cancer has generally good survival rates but in January the patient she was interpreting for took a turn for the worse and died suddenly. Anna was asked to break the news to the family of the patient, sharing the emotional trauma with the friends and family. Her ethical obligations as an interpreter meant that she was not allowed to become emotionally attached to this patient. But as a compassionate human being, it was only natural that, after two years of effectively sharing the journey with them, she should feel some sorrow and loss. Her mental wellbeing had been compromised.

Another case is Marcia, who had an assignment in a psychiatric clinic. When she arrived she was taken to a secure room with the patient and the clinician. However, the clinician realised he had forgotten his paperwork and went to fetch it, leaving Marcia alone in the locked room with the patient. To her horror, the patient became verbally abusive, and although Marcia was not physically harmed, the incident left her traumatised

Many other interpreters working in healthcare and social care find themselves in similar situations. Yet there are few outlets for the emotional impact of the job.

In-house and out of house

This highlights the importance of providing supervision, training and psychological support for interpreters working in distressing contexts.

There is some support for this as mental health is becoming a topic that more employers are taking more seriously, and talking about more openly. Over a year ago the Prime Minister launched an independent review of how employers can better support the mental health of all people currently in employment – including those with mental health problems or poor wellbeing – so that they can remain in and thrive through work. The review was very timely as research showed that poor mental health was costing businesses billions of pounds as the result of poor productivity and time off work. However, this does not apply to the many interpreters who are self- employed.

The whole issue of protection for interpreters’ well-being in situations that impact on their state of mind should be a debated topic throughout the profession. We need to have a framework in place and mechanisms such as peer support groups and psychological support lines to ensure that, through the process of helping others, these interpreters are not mentally harming themselves.

Mental health is culture-agnostic. It does not know what religion you are, or what country you come from. Poor mental health can affect anyone. Therefore, we have a duty of care to ourselves and each other to create mechanisms for our peers that allow for a safer working environment and enable interpreters to continue the crucial work of supporting the often vulnerable members of our community.

This article first appeared in the May-June 2019 edition of ITI Bulletin. 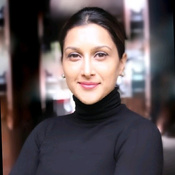 Kavita Parmar is the chief commercial officer of ITI Corporate member, Word360. In 2019 she launched the WIN Academy, a linguist network that upskills linguists beyond their vocational traning through peer-to-peer learning and support. Kavita was on the steering committee for the Mental Health Commission. She practised as an optomterist for 11 years before taking over Word360 in 2013. She also actively campaigns for mental helath support in minority communities.

The elephant in the room

Coworking: How to work alone together

Improve your physical and mental wellbeing from your desk